The proceedings before the Republic Agency for Peaceful Settlement of Labour Disputes shall be...

To check your process status, input your case number in the field below.

Questions can be sent via E-Mail to kabinet@ramrrs.gov.rs, or by using the form on...

At the 113th regular session of the Social and Economic Council of the Republic of Serbia, which was held in Belgrade on Tuesday, September 13, 2022 at 09:00 am, the Information on the Work of the Republic Agency for Peaceful Settlement of Labour Disputes for 2021 was discussed.

The session was chaired by prof. Darija Kisić, Minister of Labour, Employment, Veteran and Social Affairs, and Ivica Lazović, Director of the Agency, presented the information on the work of the Republic Agency for Peaceful Settlement of Labour Disputes regarding the records which are being kept, as well as on other matters of importance for the procedures for peaceful settlement of labour disputes for 2021.

The Information on the Work of the Republic Agency for Peaceful Settlement of Labour Disputes for 2021 provides a detailed overview of activities within its scope which were implemented, as well as the statistical data on the procedures conducted before the Agency in 2021.

You can find the complete Information on the Work of the Republic Agency for Peaceful Settlement of Labour Disputes for 2021 at the following link: Information on Work

The procedure before the Agency was initiated by the employer, the Municipality of Lučani, and the Basic Trade Union Organization of the Municipality of Lučani, the subject of the dispute being the conclusion of a collective agreement with the employer. Milica Radivojević, a lawyer from Ivanjica and a conciliator and arbitrator of the Agency since its inception, served as the acting conciliator.

At the first hearing, the Conciliation Committee was formed, in accordance with the Law. After six sessions, a Recommendation and Agreement on the manner in which to resolve the collective labor dispute was adopted, but a consensus was reached on all the points and contents of the new collective agreement, so that the agreed text was signed by Milivoj Dolović, Mayor of Lučani, and Dragan Jovičić, president of the basic organizations of the trade union of the administrative bodies of Lucani.

The representatives of the local self-government – the Municipality of Lučani and the basic organization of trade unions of administrative bodies – have illustrated how to conduct social dialogue between employees and employers in the proper manner, deciding on the procedure for the peaceful settlement of collective labor disputes, and in accordance with the recommendation of the Government of the Republic of Serbia, i.e., resolving these disputes by institutional mechanisms.

At the final conference entitled "Sharing examples of good practice on methods of peaceful settlement of labor disputes", which was held on 8 July 2022 in Belgrade, in the Palace of Serbia, the results of the project "Joint ventures of social partners to increase visibility of the concept of peaceful resolution of labor disputes" were presented. The project was implemented by the Initiative for Development and Cooperation Association of Citizens in partnership with the Nezavisnost United Branch Trade Union (Independence UBTU), the Union of Employers of Serbia and the Union of Independent Trade Unions of Serbia, with the support of the Republic Agency for Peaceful Settlement of Labor Disputes, and with the financial support of the International Olof Palme Center.

The conference was opened by Mirko Janić, State Secretary at the Ministry of Labor, Employment, Veterans and Social Affairs. The Agency Director, Dr Ivica Lazović, presented the results of the previous work to the audience, with reference to the increasing recognition of the Agency among employees, trade unions and employers in cases of labor dispute. Representatives of the Initiative for Development and Cooperation, International Olof Palme Center, Independence UBTU, Union of Independent Trade Unions of Serbia and Union of Employers of Serbia also spoke at the conference.

Owing to the support of the SOLIDAR network within the project Achieving Social Europe for All, which is financed by the European Commission, the participants had the opportunity to learn more about comparative practices through examples of good practice from Italy, Spain and Albania in order to see their application in a social and legislative framework of the Republic of Serbia, all with the aim of strengthening social dialogue and protecting the social and economic rights of citizens.

Read more
Read more
A round table was held in Subotica

The meeting was attended by trade union representatives of leading companies from the real sector that operate on the territory of the City of Subotica and employees in the public sector, while the local government was represented by the member of the City Council in charge of the economy, Srđan Samardžić.

The round table was opened by Ištvan Huđi, the president of the CAT of the City of Subotica and the chairman of the SEC of Subotica. The Director of the Agency, Dr. Ivica Lazović, presented the work of the Republic Agency for Peaceful Settlement of Labor Disputes and pointed out the advantages of proceeding a dispute before the Agency compared to a court case. Dragana Andonovska, a senior adviser at the Agency, introduced those present with examples from the practice of peaceful settlement of labor disputes. Also, the participants had the opportunity to watch the "Course on Peaceful Settlement of Labor Disputes".

Afterwards, the attendees could present their experiences, ask questions and participate in the discussion.

On July 1, the Republic Agency for Peaceful Settlement of Labor Disputes adopted the Action Plan for the introduction of Quality Management through the Common Assessment Framework (CAF).

The action plan is the result of a six-month process of CAF training, which was carried out by consultants of the EU project entitled "Support to Public Administration Reforms within the Sectoral Reform Agreement for Public Administration Reform Sector". This plan defines the activities that the Agency will implement in the coming period with the aim of increasing the quality of providing services to end users.

The introduction of quality management is based on the "Agreement on the implementation of the CAF quality management model" signed on 28 January 2022 by Marija Obradović, Minister of State Administration and Local Self-Government and Dr Ivica Lazović, Agency Director.

With the implementation of the CAF quality management model, the Republic Agency for Peaceful Settlement of Labor Disputes ranks among the leaders in the Republic of Serbia among the institutions that have opted for the introduction of this model in public administration applied in more than 50 countries, including all EU member states.

You can find more about CAF at the following link https://caf.mduls.gov.rs/

The Republic Agency for Peaceful Settlement of Labor Disputes presented its work at the invitation of the Trade Union of Nurses and Technicians of Serbia (SMSTS) at a meeting organized by this union in Kladovo from 6-8 June. On behalf of the Agency, the Agency Director, Dr. Ivica Lazović presented the Agency. He was accompanied with Prof. Dr. Bojan Urdarević and Danijela Koštan Kovačević, the Agency arbitrators and conciliators, who took part, as well.

At the gathering, trade union representatives of nurses and technicians were able to learn firsthand about the work of the Agency so far and the benefits provided by the peaceful settlement of labor disputes.

In addition to representatives of the Agency, Radica Ilić, president of the trade union, and Slađana Đukić, assistant to the Minister of Health from the Health Insurance Sector, also spoke at the meeting.

The mobile application of the Republic agency for peaceful settlement of labor disputes is for everyone who wants to initiate the mediation procedure under the jurisdiction of the agency easy and quickly, as well as for those who want to learn more about the agency and its activities. 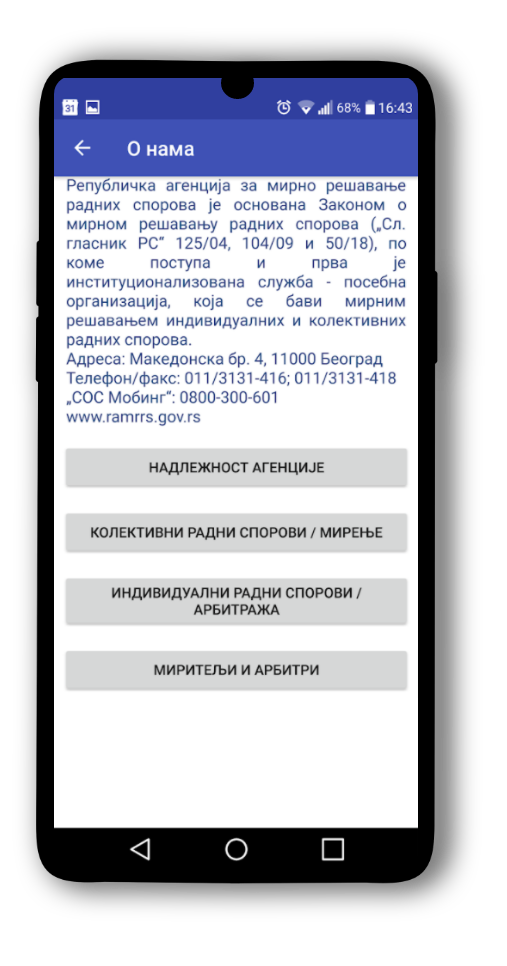